How it all started...

I've always been a sucker for a pretty face, and who can resist the allure of a purpose-built sports racing car?  Spirited performance and a sensuous shape cloaked in fiberglass.... Well, you get the idea.

And, like a lot of exotic treats, there is frequently a chequered past and secrets yet to be revealed.  With that caveat, these are the beauties we have known. 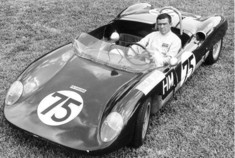 Of all the cars that have come to us over the years, none was in sadder condition than #102 when it arrived in early 2013.  Occupying a position towards the bottom of a long list projects in Carey Culpepper's Florida shop, Fred Minning's car was a complete, but decades-old basket case in the truest sense of the word.  And, yes, now it's at the bottom of our list of projects, but believe you me, it's a much shorter list!

The oft-modifed suspension needs complete restoration, the rear half of the frame needs to be reworked where a mis-guided motorcycle engine conversion was begun, and the entire Imp drivetrain needs the careful attention of a recycler!

Despite being one of the earliest Beach 4B sports racers, #102 was a perennial podium finisher in the SCCA SouthEast Division, making it to the National Runoffs four times, finishing 8th in 1965, and 6th in 1969.

This car was also the subject of a December 1965 article in Sports Car Graphic detailing in both print and pictures the car, it's owner / driver Fred Minning, and how he and Gene came to build it.  It's a very cool bit of period documentation!

Carey was generous enough to sell us the car, but it's not like he's running short of Beach projects - he still has #110 to work on if he gets the Jones, and we left #102's bodywork with him, which is in far better shape than #110's, to give him a jump start should he ever feel the restoration spirit come over him.  Or maybe he'll decide to give us a shot at it.... 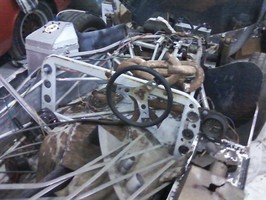 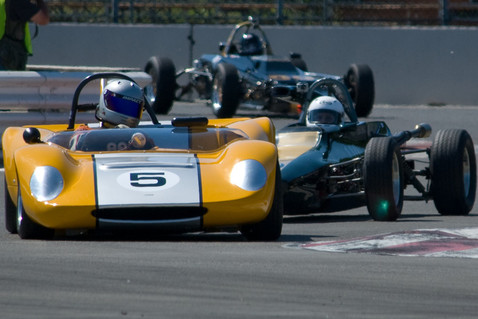 Originally built by John Fleming of Ohio, this car started life as a frame Gene had used to mock up the plug for the Series II cars.  John bought a fiberglass body and plans from Gene with the intention of building the entire car himself, but by the time he finished the suspension corners, he decided it was time to call Gene for a frame.  The one he got was covered in plaster, but it was cheap!

After John completed the car, he ran it sucessfully for a few years ("if we didn't break, we'd win"), and then passed it on to Albert 'Smitty' Smith in Pennsylvania.  Smitty later sold the car ("I don't know why I ever sold that car - it wasn't eatin' nothin!") to Larry Long, also of Pennsylvania, which is where Hugh Kleinpeter of Georgia found it and began its restoration.  Hugh placed it for sale as a roller with Andy Greene in Savannah, Georgia, and from Andy's shop, it came to us in late 2003, where it has made us happy ever since. 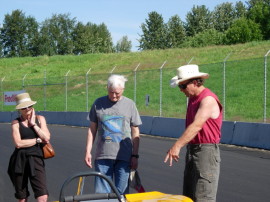 The reunion of John and Sherry Fleming with the car he had built and raced in Ohio so many years ago was an emotional, beautiful event, and something I'll never forget.  Here's the photo - Sherry Fleming, John Fleming, and me. 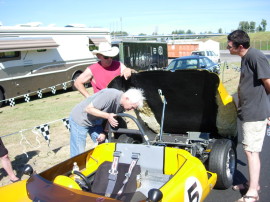 What's John looking at as Alan Petersen and I look on?

He's looking at the places on the firewall where the paint has rubbed through to the color it used to be - the blue gelcoat on the original body Gene Beach sent out, covered by the blue that John had painted it, and slowly realizing this is his car.  If you look at the old photo of the blue car above, you'll see John securing the doors of his #32 car, forty years before. 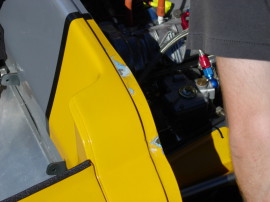 John and Sherry still come to events all over the Pacific Northwest to see their car run.  I do my best to make them proud. 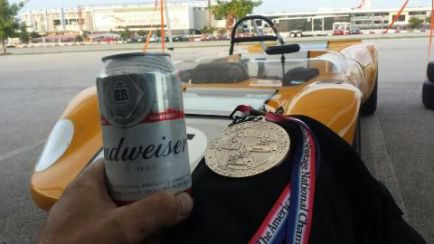 A trip to the Circuit of the Americas on a whim and an unexpected hot weather win.  See "Latest News" for details!

This is the King Kong of Beach sports racers.  Built as a factory platform for a 2.0 L. BMW, this car debuted at the 1965 Bahamas Speed Weeks.  Driven by Jef Stevens in the Governor's Trophy and Nassau Trophy Races in the Under-2-Liter class, this car ran in the feature grids against legendary drivers like Bruce McLaren, Chris Amon, Peter Revson, Hal Sharp, Jim Hall, A.J. Foyt, Bob Bondurant and many others.  Unfortunately, #105 suffered significant teething problems and did not finish well.

After several other outings with similar results, BMW pulled its support and the car went to Georgia where it was purchased in 1968 by Air Force Major Ivan 'Russ' Roland.  According to Maj. Roland, the US Air Force "spared no expense" on the car (!), and he ran it successfully with a 1600 TwinCam engine in numerous venues throughout the southeast.

Acquired in 1977 by the Cox brothers, who built VW dragster motors, the car was re-powered and was fitted with a modified LeGrand body.  The car was raced for several years, and then sold again 1983 to Jim Mock.

#105 had experienced reasonable success as a race car up to this point, but it was in the hands of Blair Underwood, its next owner, that it became an awesome weapon.  Running at hillclimbs and autocross events in and around the Carolinas, Blair set multiple ASR and CSR records at the Grandfather Mountain and Chimney Rock hillclimbs, including one that still stands today.  In SCCA Solo II events, Blair was undefeated in over 40 events on his way to five North Carolina state championships, and then turned the car over to his wife, who won two more. 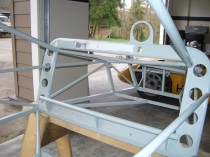 We received the car from Blair in 2008 in 'as raced' condition after having been mothballed for the better part of twenty years, and having a whole family of somethin' living in it for much of that time.

We stripped the car, restored the frame and suspension, and built a new body in anticipation of rebuilding the car to the configuration in which it ran in Nassau.  Completion was hoped for sometime around the end of the 2012, but hey, we've got racing to do, too!  We're 'on it' now, and the restoration is sure to be finished in twice as long as we'd planned, and costing four times as much.  Ain't racin' fun?! 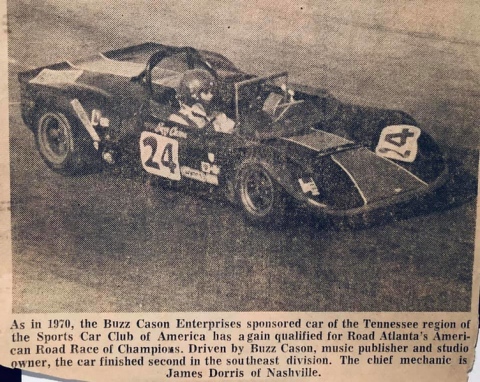 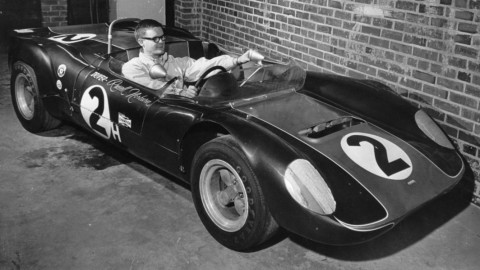 A veteran with a winning record of nearly 20 years of cut-and-thrust SCCA racing, progressively owned by a list of 'who's who' in Beach racing history and a six-time participant in the National Championship Runoffs, this car came to us as a frame that showed every battle scar, along with a collection of loose parts.  We bought it in late 2006 from Nick England, who had gotten it from Hugh Kleinpeter, along with most of the molds, parts and pieces Hugh had acquired in his Beach restoration business.  The frame had been painted 'as-was' and a new belly pan put on it, but it was in need of total restoration.

It had already seen noble duty for us, serving as the mock-up frame for the Upgrade body panels, and now its restoration has begun.  We have completely rebuilt the frame to Mk4C specification and completed and fit a new upgrade body to it.  Now it's onto the 'bits and bobs' - the really expensive stuff! 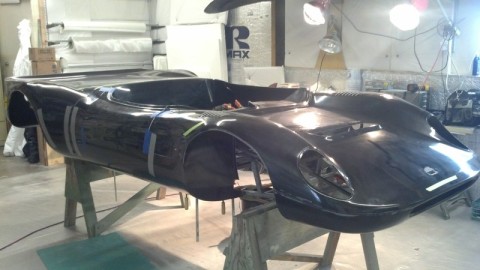 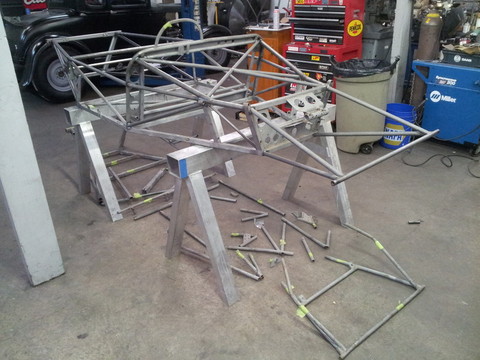 In September, #108 found its way down to California in the hands of Dennis Losher, better known as the owner and restorer of several fire-breathing Shadow Can-Am and F1 cars.  We don't know what it will be like when it emerges from Dennis' shop, but we're pretty sure it will look fantastic and be hard to get by, once on the track.  Completion is tenatively slated for Spring 2019! 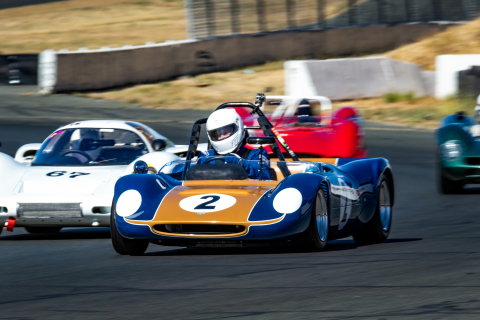 And sure enough, Dennis did a fantastic job on completing #108.  It emerged from his shop wearing the livery it had been introduced with in 1967.  His restoration so impressed those in the sportsracer world that the car was awarded "Most Beautiful Sports Racer" at CSRG's 2019 USRRC Revival opening event at Thunderhill.

Lotuses, Elvas, Genies, Chevrons, Porsches and Lolas, - but as we always knew, the Beach Mk4B II is the lovliest of them all.  Good on ya, Dennis - she's a beauty, mate! 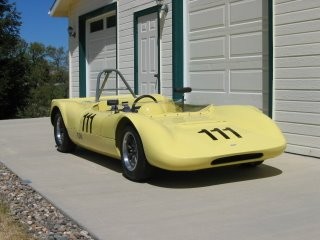 This is the car we found languishing in an aircraft hanger on Long Island, New York in 2004.  We restored the frame, repairing some ill-advised modifications in the process, and in 2008 it was sold to Franklin Rudolph as a complete, unassembled car.

Franklin put his mark on it by leaving no stone unturned in an effort to get the car to true race weight, and did a beautiful job of restoring it, using the Ford 105E powerplant.  It now prowls the racetracks of California.

Following Rudy's restoration of #111, Karl Krause weaseled it away from him and has run it continuously since 2016, making lots of race-bred changes to it in the process.  I have heard it said that he has successfully made it faster than snot, however, I have no idea what that means! The saga continues...