Three of Gene's Mk5C cars showed up to do battle - Rick Cardenas' yellow and Ed Ziegler's red and silver cars, prepared by Bill Griffith's Bigger Hammer Racing out of Dallas, Texas, and Sandy and Mike Jackson's yellow and blue car out of Miami, Florida, piloted by frequent flyer John White.

On Saturday, John in the Jackson's Vee laid down solid qualifying times while Rick struggled with an undiagnosed handling problem that kept the front end from taking a set in his yellow #33.  Meanwhile, Ed Ziegler was putting down consistently hot laps that landed him in the fifth position for the starting grid on Sunday morning. 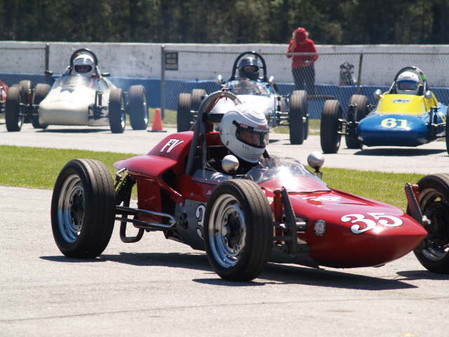 The vintage Vee starting grid was huge - 47 cars!  After the dust settled, two of Gene's cars finished in the top ten, with Jackson's Vee finishing tenth, and an especially fine drive by Ed Ziegler was rewarded with a third place finish.  After the race, Ed said "My plan was to stay right on Mike Ennis' gearbox and just hold on - I know he's fast, and that would be a good place to be.  Usually those plans go to hell within the first few seconds, but this time it actually worked!"  Mike finished less than .3 of a second ahead of Ed. 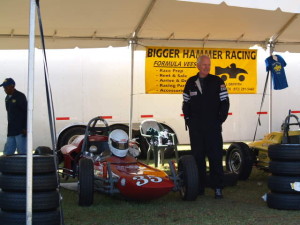 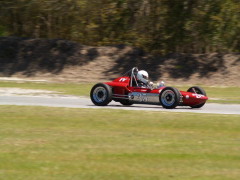 Bill Griffith, Ed's pitmate, had been needling Ed unmercifully the day before about how disappointed Ed would be when he finished behind Bill's quick silver and black Warrior Vee, but justice was done when the race ended, with Bill .6 of a second behind Ed.  Still, great results for Bigger Hammer and Mike Jackson's pits.  Mike was punted off the track by a backmarker while leading late in the race in his Templeton ShadowFax, but the rest of his cars had some 'secret sauce', finshing second, fifth, tenth (White's Beach 5C) and twelfth.

"Celebrity" guests were, among others, Scott Beach, Bill Blose and Kieth Mays (former employees of Beach Racing Cars), and Bill Boye, who drove Mk4B #109 at Sebring in 1969.  Rememberances were exchanged, featuring Beach racing names from back in the day, many of whom apparently had what would charitably be referred to as 'idiosyncracies'.  Colorful characters all, and plans were made to meet at future events such as Sebring 12 Hours in March of '14.

Special thanks has to go out to Mike and Sandy Jackson, who found all of us fencehangers spots as ceremonial crewmembers in their pit.  Mike certainly looked like he could have used a neckrub after the nasty crash he suffered on Lap 7, but he had his hands full putting his car back together enough to get it on the road back home.

It was a great weekend, a great event, and a great race, and showed everyone why Vee racers seem to have more fun than anyone!

2013 celebrates fifty years of SCCA FV racing with the FV 50th Anniversary Festival, April 5-7, 2013 at Roebling Road in Savannah, Georgia (USA, for all you Europeans!).  Information on the event can be found at: http://www.formulavee.us/50thbday.htm

The 50th Anniversary Festival will feature FVs of every vintage, with racing grids for all generations of vintage and current Vees, Formula First and Super Vee, a class that (not inconsequentially) began with a Beach-designed prototype.

After relentless bullying (he would call it 'encouragement', I'm sure) by Rick Cardenas of Blak Racing in Dallas, Texas, we have put this Reunion on our calendar, and the Beach Racing Cars company will be represented at this event.

There was a time when Gene's Vees were well known as some of the best on the planet, and we would like to encourage all FV owners to place a bookmark on this date so that we Beach owners can put our mark on this 50th Reunion.