The'64 -'65 Bahamas Speed weeks saw Beach FVs dominate the competition in the GP races - the top five finishers in '64 and five of the top six finishers in '65 were built by Gene.  Many of the top drivers of the day participated in the Nassau Vee races, and probably had a hell of a good time doing it.

The FV grid in '64 ran with the VW GT class, and Terry Oneil's wonderful book 'The Bahamas Speed Weeks' gives a rollicking account of that race:

"In the VW GT section, Foyt, driving Crocky Peterson's car, and Gurney, in Joe Villone's car were having a little game - traveling round bumper to bumper, with Gurney literally pushing Foyt round the course due to his car clearly having more horsepower.  That is, until the final lap, when Gurney pulled out, overtook Foyt, and passed the chequered flag.  However, a protest was unofficially lodged on this 'two-engined, eight-wheeled' sedan driven by Foyt and Gurney, and on inspection, it was found that the car driven by Gurney and been 'tuned beyond permissible limits'.  As a result, Gurney was unceremoniously disqualified, leaving Foyt to take the $1000 class prize." 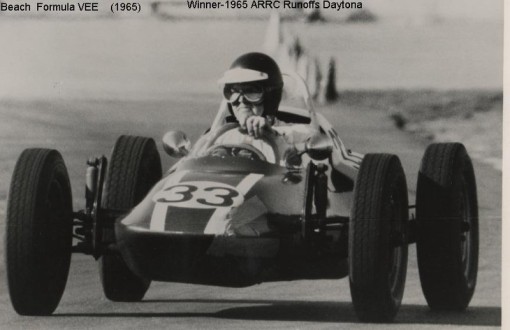 Yep.  Dan Fowler won the Formula Vee National Championship in 1965 driving a Mk5B.  Yet another example of what a great driver could do with Gene's creations.  Dan's driving credentials speak for themselves - he won the Europpean Championship's Over 1300cc GT /Sports Car class at the Nurburgring in 1954 in a TR2, besting a host of Porsches on their home turf, and finished second to Skip Barber in the 1969 Formula Ford National Championship in his Beach T-11. 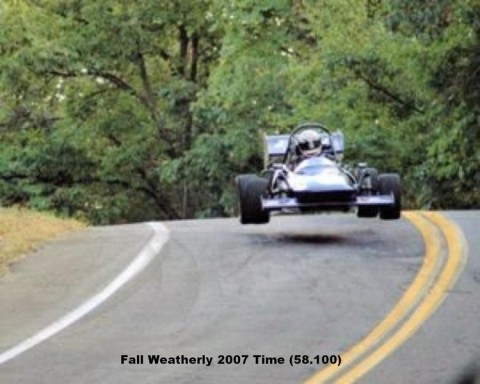 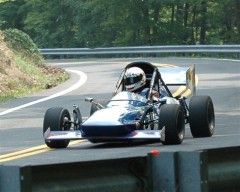 Morgan Wilson, driving a Beach Mk5 in the S2(!) class of the Pennsylvania Hillclimb Association, has amassed a record of 2nd all-time in class wins.  Go Morg - Gene would be proud of the way you kept his car competetive! 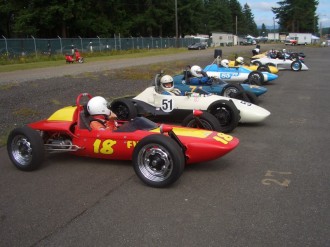 Bruce Hunt in his customary position - on the Pole.

Myles Winbigler, an SCCA racer from as far back as the early 60's, campaigned this Beach Mk5C in Pacific Northwest vintage racing for many years with his wife Retta as the driver.  When Retta retired from driving, the car was sold to Bruce Hunt, who previously had good success with an RCA FV.  The combination of Gene's car, Myles previous meticulous preparation and Bruce's mad driving skills, has made this Formula Vee nearly unbeatable in SOVREN's Pacific Northwest vintage racing series.

It is with great sadness that we note Bruce's passing after a short illness in fall 2014.  It was such an unfair draw in someone so young and young at heart.  Bruce was always in tiptop shape and well known as one of the happiest warriors at the track.  A friend to everyone he met, he is greatly missed.

Imitation is the sincerest form of flattery... 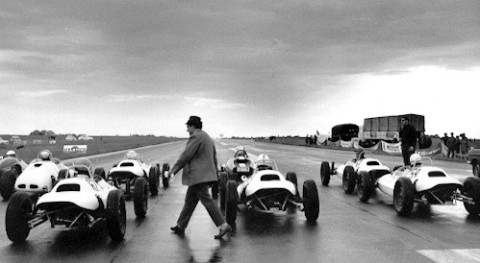 In early 1965, pushed along by the VW factory, the Formula Vee craze was sweeping Europe.  The German brass could see who had developed the superior car designs, and Gene sold 10 Mk5B cars to Porsche / Stuttgart and 5 Mk5B cars to the competing Porsche / Salzburg.  A lesser number of Formcars and Autodynamics were also purchased.

Of course, the Germans couldn't help themselves, and they took the cars apart to see how they could improve upon the design and performance.  A number of different manufacturers suddenly sprung up in Germany - Fuchs, Kaimann, Olympic and more. 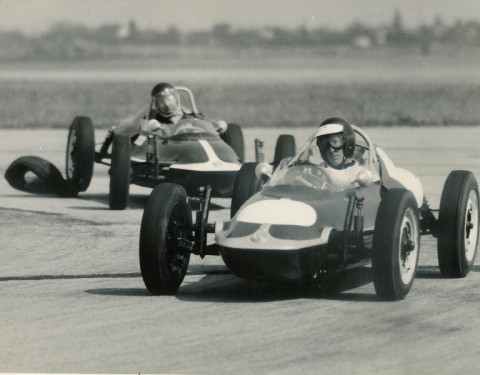 Less than two years later, who should turn up at the '66 Bahamas Speed Weeks but a German factory team headed by Jochen Rindt, with one of these 'brand new' cars, the AustroVau.  The three man team dominated the last-ever Bahamas Speed Weeks racing in the FV class.

Hmmm.  Aside from the VW medallion on the front of the cars, they look strangely familiar somehow....